Burton worked as a counselor in community-based programs and group homes providing services such as case management, life skills, counseling for children and adolescents diagnosed with mild to severe mental health, behavioral disorders and trauma.

At the Duval County Courthouse her primary responsibilities were maintaining order during courtroom proceedings. She ensured the public, jury, legal teams, witnesses and defendants proceeded through trials and other court proceedings with the required decorum.

Burton was assigned to an area to prevent illegal activity and assure the safety of citizens. In addition, some of her duties included directing traffic, writing traffic tickets, investigating accidents and crimes and responding to calls for help. Further duties included identifying, pursuing and arresting suspects and perpetrators committing criminal act as well as community relations. 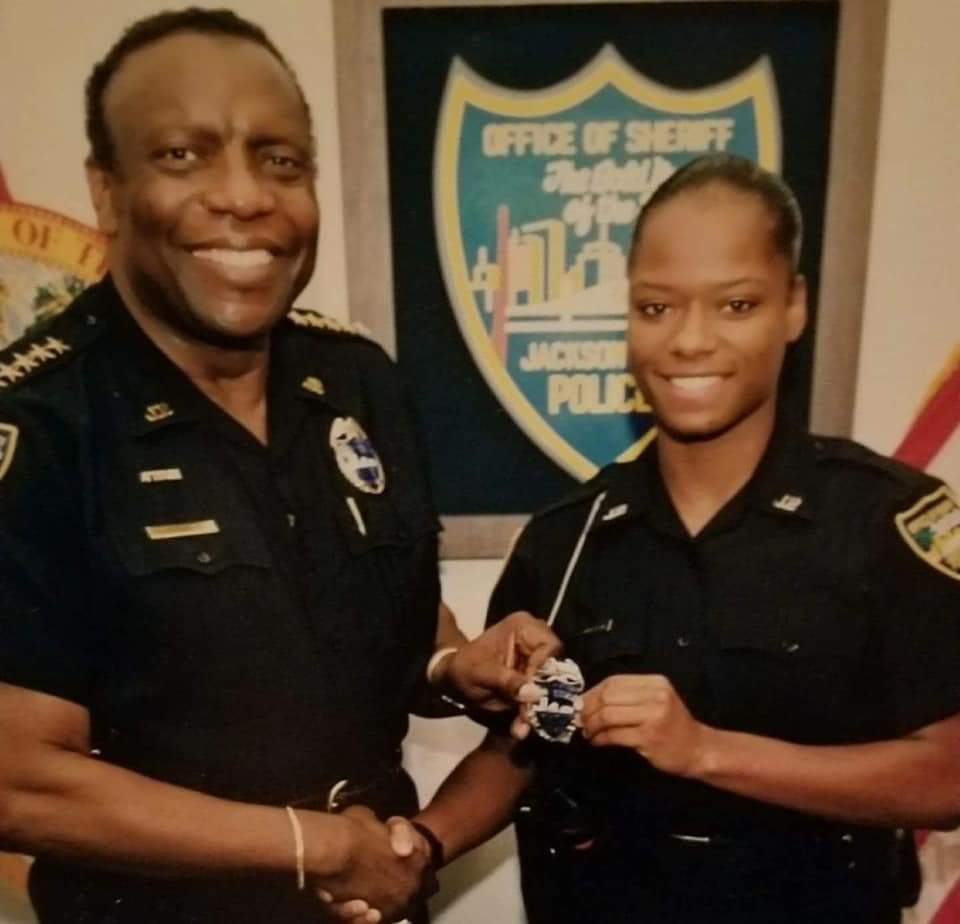 JSO established a unit consisting of police officers and a sergeant to work directly with housing managed under the Federal Housing and Urban Development Department. The new team was formed to promote police and community relations, liaison between JSO and community organizations; conduct criminal investigations and address a variety of civil or criminal activities.  The team placed a strong emphasis on community-oriented policing techniques.

She worked to support the agency’s police officers during periods of civil unrest by disrupting and dispersing unruly crowds by identifying and arresting leaders of crowds that met the criteria for arrest.

She evaluated burglary reports to determine if there were potential leads or viable evidence such as fingerprints, eyewitnesses or other evidence. She was also responsible for interviewing witnesses and victims and conducting follow-up investigations.

She evaluated potential candidates for the police academy. Her job was to review research and data, as well as to interview previous employers, associates, family members and other associates familiar with the candidate. She gathered information on candidates to determine if they should by hired by JSO.

She was a first-line supervisor to patrol and traffic officers. She supervised these officers to ensure they handled calls for service; investigations, crime prevention services and fostered relationships between JSO and the community.

Operation Safe Streets was an intelligence lead problem solving initiative that addressed crime in high-crime areas. The program was designed to prevent violence and drug-related crime in targeted geographic area. Burton supervised and assigned officers to specific tasks such as clearing drug crime locations, cracking down on drug sellers and coordinating with the narcotics unit to identify houses used for illegal drug activity. The team also fostered positive interactions between the police and citizens.

Burton was the first-line supervisor for SRO’s assigned to various middle and high schools. Her responsibilities included:

Her responsibilities included overseeing a team of field training officers in the patrol division. Her duties also included ensuring the FTU officers adhered to all policies and procedures of the unit and agency. In addition, she evaluated each police recruit and community service officer to ensure they meet the requirements of the program in order to advance to the next level.

She was responsible for the management of all sworn auxiliary law enforcement officers, who are volunteer members performing law enforcement duties suitable to their level of training, such as patrol and traffic-related functions.

Burton managed a team of patrol sergeants, patrol officers and support staff in the day-to-day crime investigations, crime suppression and community building relationships in the zone. Her responsibilities included assigning officers to areas of responsibilities or beats, conducting investigations of officers and sergeants for various policy infractions such as citizen complaints. She was responsible for studying crime patterns and trends in the zone, and for conducting investigations and operations to address criminal activity. She was also responsible for building relationships between the police, citizens and area businesses.

She was the commanding officer for various units in a patrol zone. These units included:

Burton was responsible for all administrative duties, public relations, correspondence, day-to-day operations and finances. She was responsible for the overseeing of the maintenance of PAL equipment, facilities and its fleet. She was the liaison between the Sheriff’s Office and the Board of Directors, providing supervision of all PAL staff, assigned JSO personnel, programs and special program assistants. She was responsible for implementing and monitoring strategies and initiatives for all fundraising activities, including prospect research, cultivation, major gifts, as well as corporate, foundation and government grant applications.

She was the administrator of the following units:

Burton is responsible for ensuring commanding officers, supervisors and officers under her command perform their patrol function by responding to calls, proactively inspecting areas to suppress criminal activity, enforcing traffic laws, and fostering partnerships with citizens using the principles of community-oriented policing. She is also responsible for ensuring all personnel under my command adhere to all agency policies and procedures and when necessary, administer disciplinary actions in accordance with policy.